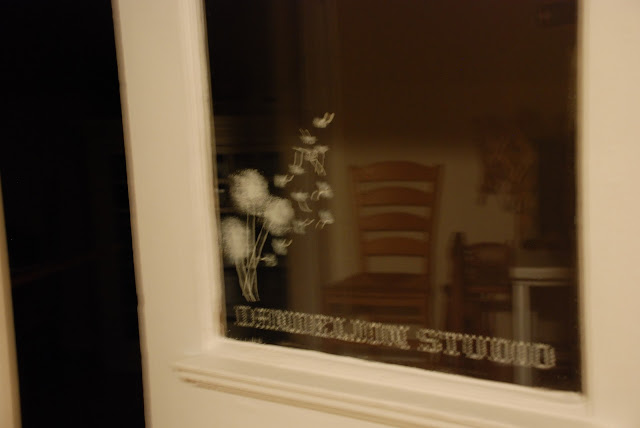 We've got more irons in the fire than a blacksmith at the Kentucky Derby.  I've still been piddlin' away at the studio, in addition to working on bathroom storage, etc.  Anna saw the studio a couple of days ago, and said "It's just YOU, mom!" I assumed that she meant the decor, but later wondered if that was presumptous of me....maybe she was referring to the stacks of unfinished projects waiting to be finished!  I had thought it would be fun to make a design on the door window.  After going through supplies, there wasn't any etching stuff left, after-all.  It's spendy, and permanent, so decided to just use the same white interior latex paint I had used in the room.  I painted the design backwards, on the inside of the window.  It's not as awesome as imagined, but can stay for now. Actually it's pretty subtle during the day.  (This pic was taken about 8pm.)
I had been feeling sort of crummy last week, but snapped out of it just in time to go to a Dinners for 7, that our church was doing.  We had signed up on the list.  Our hostess had called us and invited us, and assigned a food for us to bring.  We were supposed to bring potatoes.  I took party potatoes and because they are a cholesterol nightmare, thought maybe there should be a healthy alternative.  So I also fixed Ina's Roasted Winter Vegetables.  It was a nice relaxed evening of getting better acquainted with new friends, and re-kindling old friendships.  This is going to be a very jam packed week, but hopefully I can finish up some of these loose ends and post some pictures of something actually DONE!
Posted by ****** "M" at 9:05 PM 2 comments: 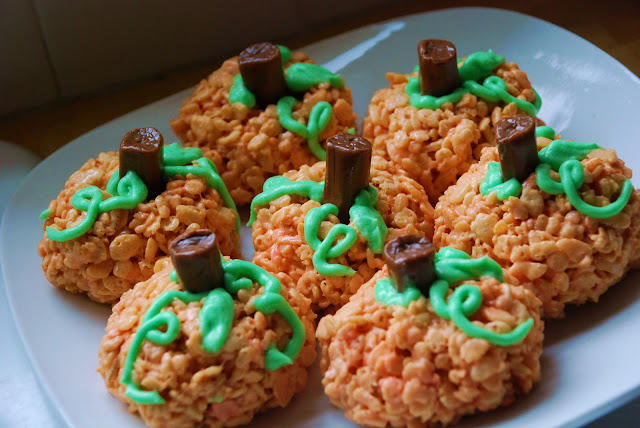 Made a little after school snack for the girlies today.  I froze some for the other Grands.  Hope they will be ok.....have you ever frozen krispie treats before?  Do they turn out alright?
Some of you have been wanting to see finished project pictures....believe me, that makes two of us!
Progress is in the making, but seems like it's taking baby-steps.  Maybe I could get more accomplished if my mind wasn't always drifting to vintage travel trailers, amber birch curved paneling, marmoleum, jacks, hitches, curb sides and street sides, skins and wheel wells....
Posted by ****** "M" at 4:54 PM 1 comment: 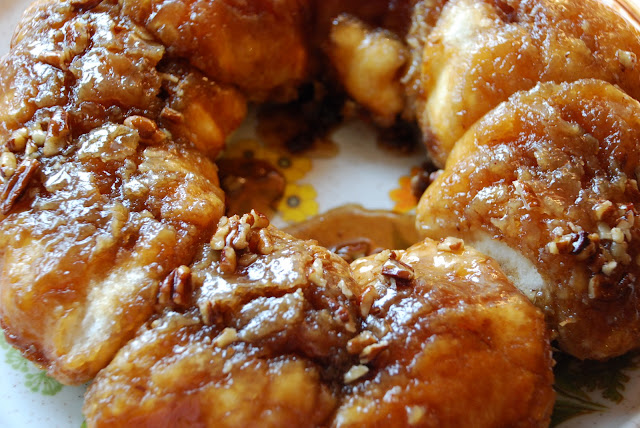 Fall days, cool and overcast, just seem to call for caramel, cinnamon, and nuts.  This recipe for Sticky Bun Breakfast Ring is very similar to the Swedish Tea Ring that our family has made for years.  It calls for canned biscuits, but as far as convenience biscuits go, I prefer Walmart's frozen buttermilk biscuits.  (They don't have as much chemical taste) I used 8 of them, and defrosted them carefully, in the microwave first. Jim really liked this.
We've had lots of Dr. appts. and re-model-y things going on around here lately.  Not that blog worthy unless you like looking at pictures of dismantled chair rail, wainscoting, and huge holes knocked in the drywall.  Yesterday, I guess we could've done sequential pictures, so you could watch the drywall mud dry. ;-)
Posted by ****** "M" at 12:43 PM No comments: 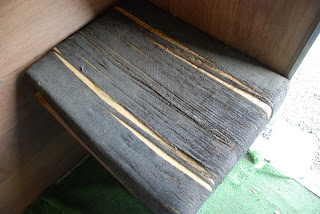 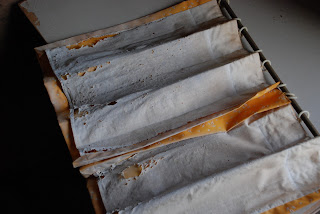 I've been a slogging blogger lately.  Things have been really busy.  Tearing up everything you own is time consuming!  Saturday, Jim and I went out and worked on the little trailer.  No phones, no place we had to go...we actually got tons accomplished:
We tore out the ratty old dinette cushions, curtains and rods,  the green astro-turf, and the mattress.(oh, and 2 pair of dirty socks!)  It already smells better in there! (well, actually maybe not much, yet)
After removing many old rusty screws, we finally were able to take out the old cabinet above the sink and stove.  We tore out old wiring, and the wall between the bathroom and the bed.  Included in that was the removal of the bathroom sink, and it's plumbing.  We were on a roll....we went under the trailer, and disconnected the blackwater tank (sewage tank) (thankfully the trailer had been out of use a long time, so no odor), and removed the cracked grey water tank.  Topside, we pulled the showerpan/blackwater tank.  There's a whole pile of cuphooks, that have been removed...that, and the cobwebs are probably what was holding the place together.  We vaccumed, vaccumed, vaccumed....

Sunday, we had a good service at church.  The worship and sermon all wove together, about Christ being our sufficiency.
Sunday evening, Joel cooked dinner for us; wonderful Chicken Fried Rice,  Chinese Barbequed Pork, and a yummy zippy sauce to put on things.
Monday; In the house we were supposed to paint the bathroom and replace the chair rail at the top of the beadboard wainscoting.  As we were removing the old chair rail, Jim brought up the subject of bathroom storage again.  We did some further investigation, and decided to do some built-ins in a wasted space under the stairs.  The beadboard was removed from the area, and there are now big gaping holes in the bathroom drywall under the stairs.  I was given the task to figure out what to put in the hole, (since I'm the picky one), so off to town I went.  (Today, we will start working on it, and see if the plan works.)  We know we're good at tearing things up...let's see if we can put anything back together!
Posted by ****** "M" at 8:54 AM 2 comments: 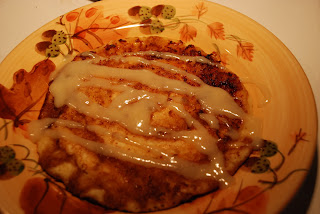 This morning I fixed a yummy breakfast.  It was fun cooking bacon Joel and Anna gave us, and making these cinnamon roll pancakes, cracking up, while listening to "Diary of a Wimpy Kid" being read to me.  These pancakes are very good, especially with a nice glass of really cold milk.  Mine didn't turn out as perfect and pretty like Recipe Girl's, but they tasted fine.  My cinnamon filling was too runny.  After the first one, I drained off some of the excess melted butter, before squeezing the filling on. One pancake per person is plenty.
Posted by ****** "M" at 9:20 AM No comments: 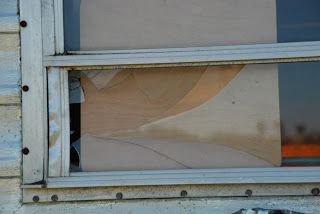 When this broken window is repaired..... 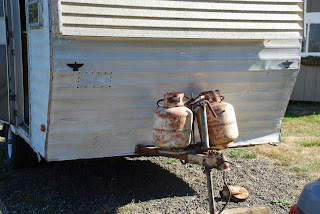 when new jacks, tanks, and battery are in place..... 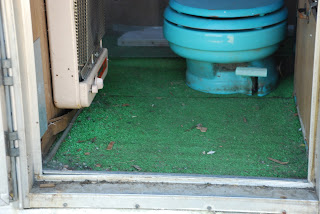 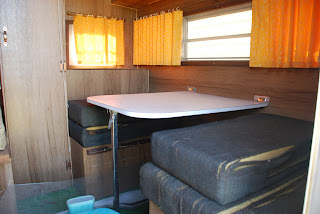 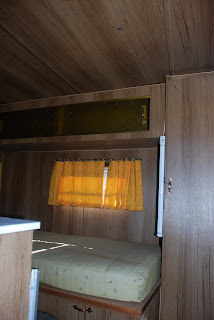 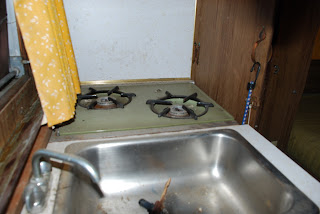 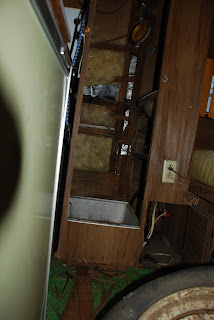 when the green grass carpet is gone, the plumbing and wiring are repaired,
and everything is gutted and re-done... 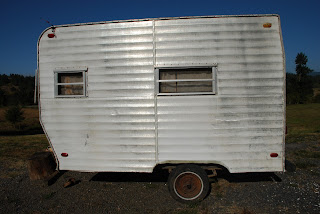 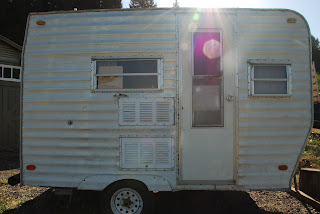 When it has new tires and it's all repainted and has a cute little awning with party lights....
Won't it be just darling?!
(I've already looked up the treasured campsite # to reserve it.)
*I know...AGAIN with the "happy as if they had good sense"; right?*
Posted by ****** "M" at 10:55 PM No comments:

Once upon a dandelion, the little family was increased by 2 more daughters.  There were further camping adventures.  It seemed there were crazy things to happen when tent camping; even in the presumed safety of their own back yard.  The youngest daughter and a cousin slept in a tent in the orchard, only to be startled by the scream of a cougar.  The Mama heard the sound, in the house, as she was getting ready to go to bed, for the night.  She threw the front door open just in time for her daughter to come running in.  She ran to help her niece, who was calling "help...help!"  After quickly ripping the niece's hair out of the tent door zipper, where it had caught, they both ran to the safety of the house.

The last Tent Camping trip the family would take together, was after the first-born daughter was married.  They went to the coast, they had a confirmed reservation, they got there early, and everything was great.  The weather was exceptionally warm and beautiful.  They decided to take a night-time stroll down to the beach.  As they passed through the campground, the last camp spot, sat on a little dune, overlooking the water.  Parked there, was a cheery little camp trailer, with a party light trimmed, awning.  It was just indescribably... perfect.  The little Mama ... I ...  was smitten. 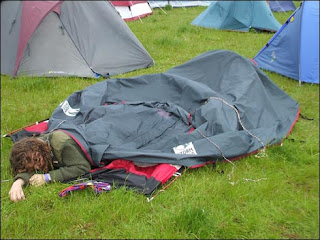 When the Baby girl was three years old, the family decided to travel across the U.S. to visit Grandparents.  They planned to drive all day, and camp at night.  There were some pretty crazy complications, which  I won't get into here, but it led to another late night adventure.  As they finally began to set up camp in the dark, all of the other campers were already sleeping.  The little family had outgrown the pup tent, so they had borrowed a large 2 room tent from friends.  Unfortunately, it had been a last minute decision, and they had not done a set up, trial run. Now, how on earth to get this tent up?!  Finally out of fatigue and frustration, they gave up, found the doorway of the collapsed tent, placed  their sleeping bags inside, and pulled the tent over them. (Something like the google image above)  (Ironically, most of the "collapsed tent: images I came across on-line, involved drinking or drugs...)  That also seemed to be the initial assumption of the amused and inquisitive onlookers in the morning.  The little family just shrugged it off, laughed with the crowd, rolled the tent up and went  on their way.  (Happy, as if they had good sense!)  After a nice days drive, before dusk, they found a nice little campground and stayed on cots in a very comfy little cabin. 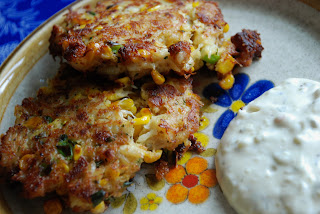 Anna gave us some fresh crab Joel's Dad had caught.  It was really nice crab, but didn't go with the menu plan at the time, so I picked it all out of the shell, and froze it.  Today was "tailgating" day and Jim was watching football in the snug.  Not really feeling in the mood for doing the chili or brats thing, decided to make corn-crab-cakes and homemade tartar sauce instead.  I used this recipe.  I chilled the patties before cooking them.  It called for separating the cornbread stuffing mix, and patting the patties in half of it before frying.  I suggest putting all of the crumbs in earlier, all at once, as a binder, and slide the patties straight into the oil, with less messing around with them.  The first ones I did as directed, fell apart easier.  The ones I didn't coat, held their shape better.  They were really tasty, Jim really liked them, and didn't even miss the chili!
Posted by ****** "M" at 4:49 PM No comments:

No, Not by might, Nor even power, But by Your Spirit, O Lord

Lives that are lost, restored.

Flow through this land,

Verse of the day